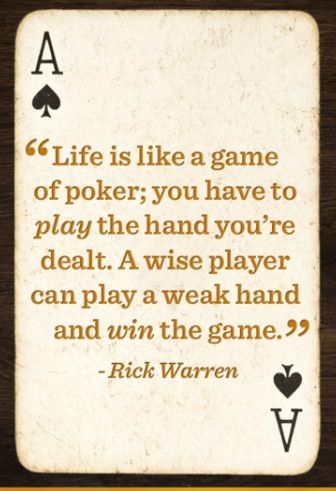 The dealer looks to each player at his table. Shuffling, he asks for their ante.  The sound of the chips as they bounce in a pile is all the indication the dealer needs. He shuffles…eyeing each player as he slides the cards along the felt table top.

The players duck their heads low. Holding their hands over the top of their cards, they peek at what has been dealt to them.

Some of them silently groan.

Their cards don’t offer much. They will have to discard many of their cards, and hope for something better.

Other players are inwardly giddy. Their hands are set. It won’t take much to win.

Each player discards a portion of their hand.  Looking across at each other, some for the first time, they take in what each player is doing. Looking for each other to show emotion, a tick, a nervous twitch, anything to show or tell them what hand the other person has, as the dealer gracefully pulls the discarded pile away, and swiftly thumbs the new cards.

The players shift in their seats.

Some players had poor hands, but the newest cards have given them an advantage.

Some players had a fairly decent hand but would have preferred a better one.

Others, hanging their heads in shame, they throw their cards down with a heavy sigh…not willing to bet, or even try to bluff for a win.

The dealer raises his eyebrows.

Who will raise the stakes?  Who will show their “tell” and give it all away by a twinge of their mouth or a tap of a finger?

Most players throw a few chips in.

Not a word is said.

The tension is building.  Spectators have crowded around the table. Not brave enough to join in but enthralled with the daring and recklessness that these players have.

It is time for the reveal.

One woman holds a pair of nines.

An older gentleman, he had bet everything he had left…on his straight.

It was the young man though. The one who had been quiet and unobtrusive the entire time. He was holding a Royal Flush, yet to everyone’s surprise, he didn’t gloat. He stood, accepting the round of applause for his strategy and discipline. He then, walked away, leaving all his chips on the table.

A young woman, her eyes bright and sharp, chased after him. She yelled, “Sir, you forgot all the money you won!”

He turned back, and said, “It was never about winning. It was simply for the joy of playing.”

Which player are you?

How are you playing the cards you have been dealt? Sure, you could hand in a few cards and hope for a better hand. But if you can’t find happiness and the thrill of living in what you have, what makes you think you can with an entirely different hand.

Can you play the game simply for the joy of living, or are you still searching for different cards to make you happy?